It cannot be denied that the World Heritage Sites are among key tourist pullers of any countries since these places are striking reflections of the indigenous culture, customs and lifestyle. Sri Lanka is one of the richest treasure troves of both natural and man-made wonders in Asia. There are 8 UNESCO World Heritage sites in Sri Lanka that you should take into consideration in Sri Lanka vacation. This World Heritage Site list of Sri Lanka comprises of 6 cultural sites and 2 natural sites.

The ancient city of Polonnaruwa was the very first cultural sites in Sri Lanka listed in the UNESCO World Heritage Sites in 1982. Polonnaruwa is the center town of the Polonnaruwa district in the North Central Province of Sri Lanka. This royal ancient city of the Kingdom of Polonnaruwa is the second oldest of Sri Lanka’s ancient kingdoms (after Anuradhapura) and was made the capital of the island in the 11th century by King Vijaybahu I. There were three Kings dominating this ancient city over three periods in the history. Polonnaruwa reached its height of prosperity in the 12th century but was destroyed by invaders in the following centuries.
Today, Polonnaruwa is home to the extensive remnants of a medieval civilization which have been incredibly well-preserved and are still majestic to see. As well as ancient palace ruins and the remains of Buddhist and Hindu shrines, there are four breathtaking statues of Lord Buddha at Gal Vihara, a colossal dagoba and the ‘Satmahal Prasada’ – a seven-storey structure which has such unusual architecture that modern-day historians remain baffled.
Opening hours: 7.30 AM – 6.00 PM
Entrance fee: US$ 25 for adults, US$ 12.5 for children
Top Tip: Polonnaruwa is so large and you are recommended to visit it by rent a bike, take a tuk-tuk or have to be prepared for 6 – 10 kilometers on foot. 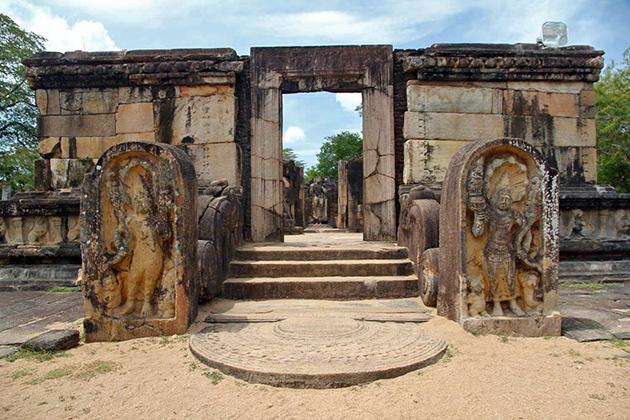 The ancient city of Sigiriya is another cultural site inscribed into the list of UNESCO World Heritage Sites in Sri Lanka. Located in the northern Matale District in the Central Province of Sri Lanka, Sigiriya is a small town in the Cultural Triangle which is renowned throughout the world for its once-spectacular 5th century palace built on top of the astonishing Sigiriya rock fortress – also called “The Lion Rock”, franked by a complex system of beautiful water gardens.
Sigiriya Rock Fortress constructed as a refuge by King Kasyapa after he killed his father to take the throne. It was a system to transfer water between the top and the foot of the rock, which is one of the most incredible feats of engineering in Sri Lanka’s as well as in the world’s ancient history. After the King’s death, this palace and the fortress was left in abandonment. The ruins can still be seen, including a giant lion’s paw which marked the gateway and the enormous baths which look out over the picturesque panoramic views, and ancient cave paintings mid-way up the rock.
Opening hours: 7.30 AM – 5.30 AM
Entrance fee: US$ 30 for adults, US$ 15 for children
Top Tip: Climbing the Sigiriya Rock is not an easy task but it’s thrilling. You are advised to walk up the fortress in the early morning to avoid crowds and sun. 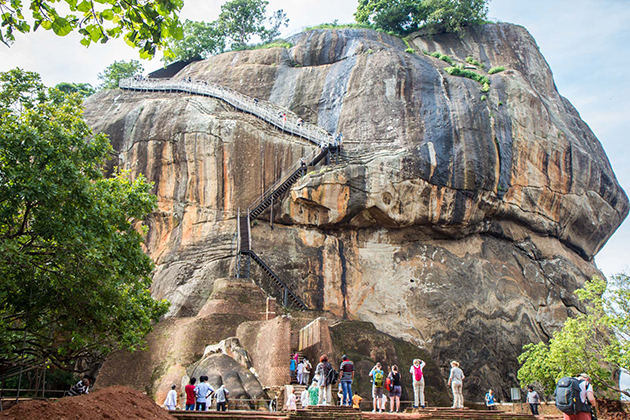 72 km from the hill capital of Kandy, the fairly large town of Dambulla is most known for the famed Golden Temple of Dambulla, also known as Dambulla Cave temple which was added to the list of World Heritage Sites in Sri Lanka for its cultural significance. Over the years, Dambulla has become an emblematic image of Sri Lanka and the rich history it boasts.
Dambulla is believed to have been of a worshipping place since the 1st century BC, when King Vattagamani Abhaya, driven out of Anuradhapura and took refuge here. Dambulla Cave temple is also the largest and best-preserved cave temple complex in Sri Lanka, which has five caves and displays 157 statues of the Lord Buddha, Sri Lankan kings and gods and goddesses. Fine work of murals created by the King when regained his throne can also be found within these caves. Following paintings were made by later kings and the process of retouching original and creating new artwork continued into the 20th century. Visitors can appreciate intricate and delicate paintings covering the ceiling and walls in the temple. Its historical, archaeological and artistic implications make this complex a must-see.
Opening hours: 7.00 AM – 7.00 PM
Entrance fee: 1500 Sri Lankan Rupee
Top Tip: Before entering the main cave area, make sure to take your shoes off and you can wear socks to avoid the pain from the stones. 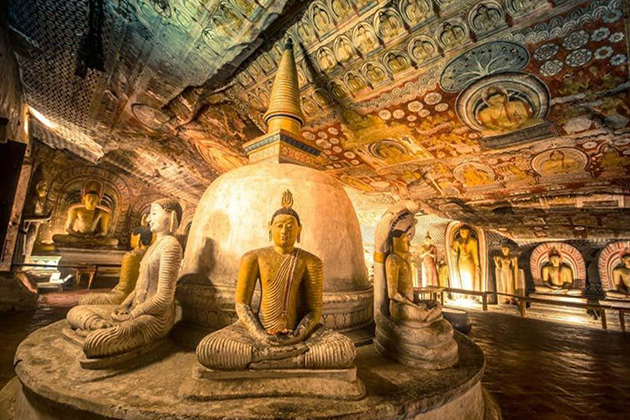 Old Town of Galle and its Fortifications

The Old Town of Galle and its fortifications were designated as World Heritage Sites in Sri Lanka in 1988. Galle is one of Sri Lanka’s most charming destinations, home to the famous 17th century Dutch Fort known as the place where the Portuguese landed when they first made it to Sri Lanka during the early 16th century. In the next two centuries, it fell under the rule of the Dutch. This explains why a visit to the Old Town of Galle will remind visitors of one of a town in Holland.
The Dutch influence in this port town is still very much evident until today, through many beautiful pieces of colonial architecture behind its walls, a thrilling collection of unusual shops and restaurants, and narrow alleys and old Dutch houses as well. Dutch Reformed Church, National Maritime Museum, Old Dutch Hospital and the New Orient Hotel are the major attractions within the fort.
Entrance fee: No admission fee is charged
Top Tip: Standing on the top of the fortress walls at dusk is an amazing way to see the old town. 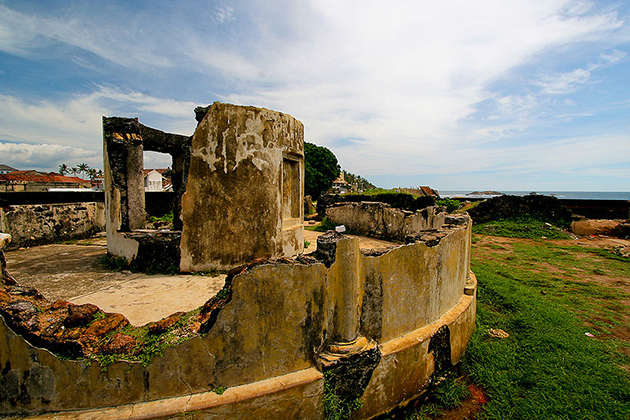 The holy city of Anuradhapura is another major city listed as a World Heritage Property in Sri Lanka for its cultural significance. Specifically, Anuradhapura served as the center of Theravada Buddhism for several centuries – this makes it sacred to the Buddhist world. It is the capital of the North Central Province and one of the country’s ancient capitals. Anuradhapura is also known as the spiritual and secular capital of Sri Lanka for over a millennium for the well-preserved ruins of the ancient Sri Lankan civilization. The extensive ancient ruins cover a total area of 40 square kilometers. You will find three giant tanks, towering dagobas, a remaining palace, Isurumuniya Vihara rock temple and Royal Pleasure Gardens.
This city is home to the Sri Maha Bodhi – a cutting said to be from the fig tree under which the Lord Buddha sat and gained enlightenment. The tree is Anuradhapura’s spiritual heart and is thought to be one of the world’s oldest trees. Cuttings of this sacred ‘mother tree’ have been successfully planted in temples all over the island and many countries in the world.
Opening hours: 7.00 AM – 7.30 PM
Entrance fee: US$ 25 for adults, US$ 12.5 for children
Top Tip: The ruins of Anuradhapura are spread out over the city and you should select some to visit. 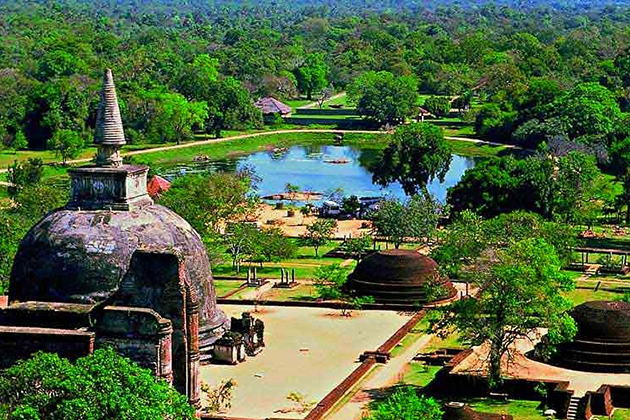 Kandy together with Anuradhapura and Polonaruwa forms the Sri Lanka cultural triangle. The Sacred City of Kandy is the final site added into the list of cultural World Heritage Sites in Sri Lanka. Generally recognized as Sri Lanka’s cultural capital, Kandy was the last capital of the Sinhala Kings whose patronage enabled the Dinahala culture to flourish and stay for more than 2,500 years until the occupation of Sri Lanka by the British in 1985. Kandy is considered a sacred Buddhist site and a famous pilgrimage site.
The city is also home to the Temple of the Tooth Relic (the sacred tooth of the Buddha) which is one of holiest shrines in Sri Lanka. Visitors can experience Kandy Esala Perehera, an annual ritual of the Sacred Tooth Temple in the months of July and August.
Top Tip: Taking the train to Kandy from Colombo is mind-blowing. 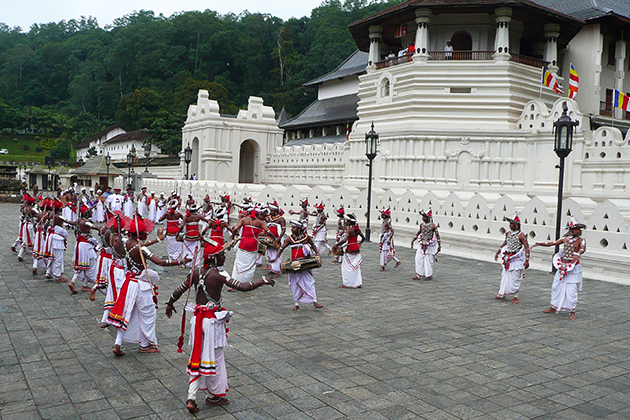 Inscribed in the World Heritage Site list in 1988, Sinharaja Forest Reserve, translated as “Kingdom of the Lion”, is both a biodiversity hotspot and national park of Sri Lanka. Sinharaja is mainly hilly virgin rainforest in the landscape and the lowland rainforest eco-region in the reserve is the major component of this UNESCO attraction. Sinharaja is last pristine area of primary tropical rainforest in Sri Lanka and is prized for its vast variety of endemic species including mammals, butterflies, birds, fish, reptiles and amphibians.
Opening hours: 6.30 AM – 6.00 PM, ticket office to 4.30 PM
Entrance fee: Adult 644 Sri Lankan Rupee(Rs), Child 325 Rs
Compulsory guide per person from Rs 1000
Video camera: Rs 560
Top Tip: Sometimes it’s hard to spot animals sue to the dense vegetation, and drier months (August to September, and January to early April) are the best times to visit. 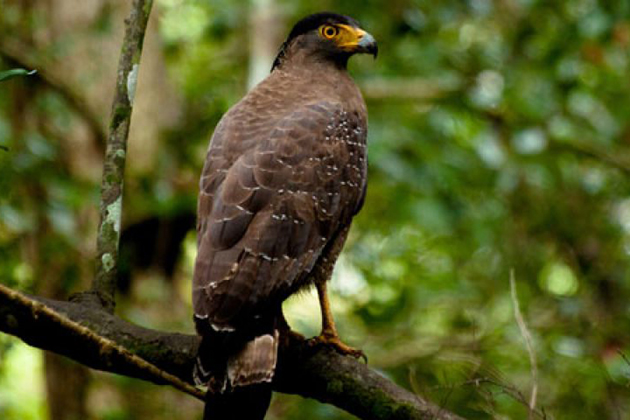 The Central Highlands of Sri Lanka is the newest addition to the list of UNESCO World Heritage Sites in Sri Lanka. This world-known property is made up of three wet-zone parks: the Peak Wilderness Protected Area, the Knuckles Conservation Forest, and the Horton Plains National Park. The highlands are therefore composed mainly of a rainforest area with the highest point is Adam’s Peak which has become a significant center for Buddhist pilgrims.
Central Highlands of Sri Lanka is universally important as it houses a natural habitat to an incredible range of endemic species such as Horton Plain’s slender loris, bear monkey, the Sri Lankan leopard and other sub-species of mammals.
Top Tip: January to April is ideal to visit the central highlands as the weather is pleasantly cool and relatively dry. 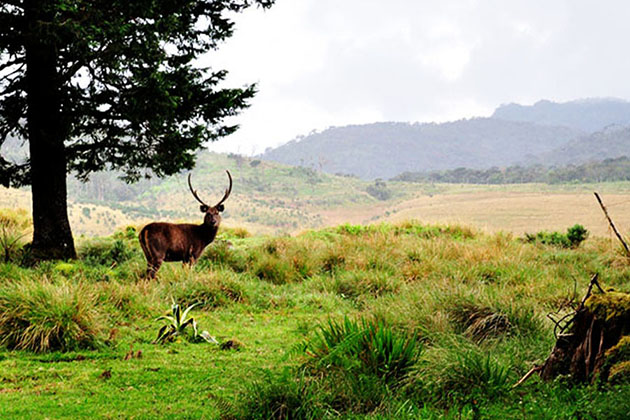